Sedrick-the-sourdough-start went to work this week and produced some excellent bread. My starter is now a couple of years old, and was blended with some San Francisco starter in March that gave it a lovely depth of flavour. Sedrick was originally quite tart, very lively, and often blew the sides out of sourdough loaves. The addition of the San Francisco blend has mellowed the flavour and calmed Sedrick down a bit, although it still gives a good oven-rise and an excellent flavour.

Good sausages from the butcher at the farmer’s market, a golden hued onion, and a burst of sudden colour in the trees calls for the reintroduction of heartier food. Comfort food. Comfort as we slip into another layer of clothing to ward off the chilly mornings. And my favourite recipe for bangers and onion gravy is Nigel Slater’s “non-recipe”. No ingredient list, just eloquent writing about this process of creating a good plate of food. Food that Peder eats without hardly spilling a word until he’s finished, and then he says, “Well, that was good.” He’s a man of few words. But good taste.

Nigel Slater’s recipe for Sausages and Onion Gravy is at http://www.theguardian.com/lifeandstyle/2012/feb/12/nigel-slater-classic-sausage-mash

And speaking of Peder, he put up another two jars (massively huge jars) of pickles from his Danish asker plants. I suspect that’s the last of the cucumbers that those plant will produce. They’re taking on white powder mildew now, a sure sign that the plants are stressed and declaring their job done.

The garden is turning autumn-ish. The flowers are still with us, but many are holding on to their petals like dying lovers. Every gust of wind sends a few more toward freedom. It’s seed collecting time in the garden, and I love that almost as much as I love deadheading spent flowers. 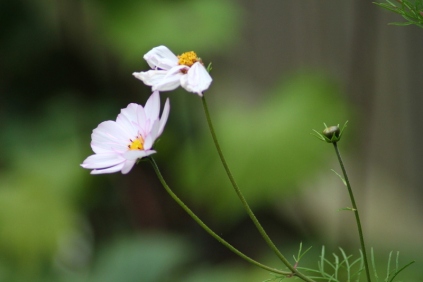 As you can see, we are still working our way through a good supply of tomatoes. The larger ones are finished but the cherry and plum tomatoes are still ripening. The yellow plum tomatoes disappointed; too meaty, no juice, prone to insect attack more than usual. I’ll not suggest those next year.

I’m looking forward to heartier meals now that autumn is here. Do you have favourite autumn meals you rely on at this transitional time of the year? Salad just don’t seem right anymore. I’d love to hear your suggestions!