It’s all about floors these days. Underfloor heating, latex self-levelling subflooring, hardwood floor boards, diversion routes through the house so we don’t step on gooey surfaces, and keeping Molly-the-Springer-Spaniel confined until the floors settle and dry. I mean, goodness, this isn’t Grauman’s Chinese Theatre or Hollywood Boulevard where the stars plant their hand and foot prints in wet cement, and Molly, who rather fancies herself as the family ‘star’ would leave her footprints everywhere!

So, to business. The kitchen, dining room and hall were no-go zones yesterday. It’s a brain-tease figuring out what you need to use during the following 24-hours. Milk, sweetener, tea, coffee, a few cups, mobile phone, purse, coat, keys, (huh! keys, where are the keys!) a knife and fork, …. And then we decided it was easier to just go out for a bite to eat. We went to Nando’s. We’ve lived here for twenty-three years, and we’ve never been to Nando’s. I love new discoveries. I love Nando’s. I mean, I’m in love with Nando’s chicken! Long live piri-piri sauce! Ahem. Please excuse my enthusiasm. 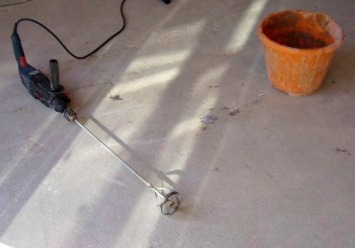 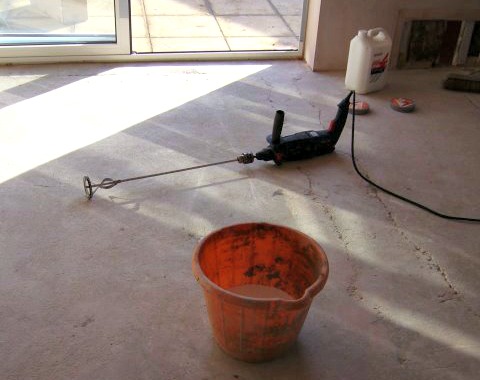 Anyway, back to the remodelling – the underfloor heating is a long length of thin wire that runs in loops across the base level of the floor from wall to wall. It’s set on the cement, which is primed with a glue that Andy-the-Builder rolled on like sticky paint. Then it’s taped into place. The latex material is mixed with water using what looks like a huge handblender, and then it’s poured and spread evenly across the surface. It settles and levels itself; that’s why it’s called self-levelling. Very clever stuff. The heating wires aren’t laid where the fridge-freezer or kitchen cabinet units go; no need to preheat pots and pans in the cupboards. I’ve also been warned not to set the kitchen waste bin on the heated floor because the heat speeds up decay and smelliness. As luck would have it, I ordered a garbage and recycling doodad for under the kitchen sink. Problem solved. 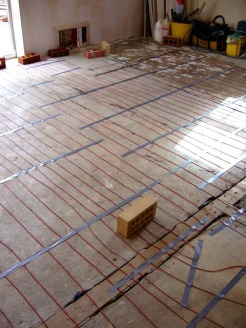 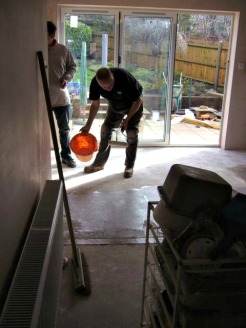 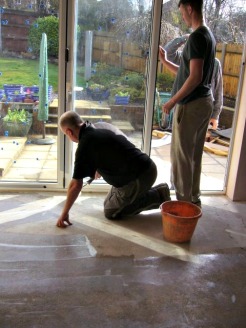 The latex subflooring ‘cured’ after 12-hours, but it was well and truly hard the next morning. Molly-the-Springer was allowed brief freedom again. But now she’s back in the conservatory, watching The Jerry Springer Show (she thinks he’s family) as the woodlaying-guys lay the hardwood floor boards in the hallway, dining room and kitchen. The skill saw is kicking up dust everywhere, and my right sinus is kicking up a fuss of its own, making itself known. Hmmmm. 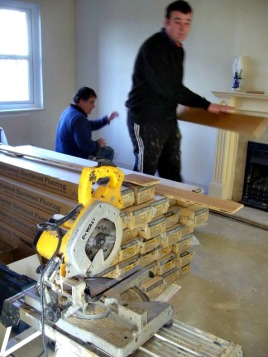 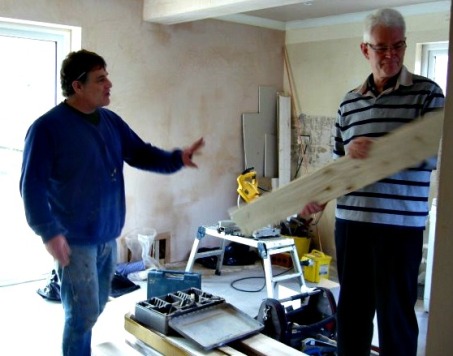 Okay, on to the windows. Most are installed but not all. One set for the guest bathroom cracked when it was installed. That was replaced yesterday. Yeah. One set of windows by the front door were made the wrong size, so those need replacing – the old windows are still in that frame. Boo. The windows in the ensuite bathroom originally arrived as non-frosted, which meant all the neighbours could see us step in and out of the shower, brush our teeth, shave, etc., so we taped a sheet up to the wall for some privacy. The sheet preferred to fall of the wall and drape itself about the floor like a drunk. So yesterday, the four new ensuite bathroom windows panes arrived. Yeah. Three are frosted, one is not. Boo. Soooo, that one needs replacing. 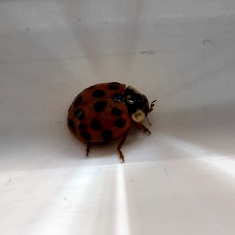 We are also replacing a few blown-sealed windows in the conservatory, and replacing the plastic roof panes with Pilkington self-cleaning glass. This means the frame structure needs reinforcing for the extra weight of the glass. There might also be headroom now for a fan and light, which would be nice in the summer when it’s very hot in there.

And the house is littered with sleepy ladybugs (ladybirds) who were woken from hibernation by the Chris-the-Window-Installer. They toddle around windows and the floor and the curtains half-drunk from sleep. I keep ushering them outside so they can feast on green fly this summer.

So that’s it for today …. Although there might be a quick update later with photos of the new flooring in the dining room, kitchen and hallway.